Background History of the Ministry

Since Myanmar regained her independence, there emerged  armed  groups due to misunderstanding among the national races and difference in ideology. For this reason, the successive governments could not implement border areas development measures. Border areas development measures together with peace and stability measures could be implemented with added momentum by laying down systematic plans when some national armed groups came into the legal fold. Border areas development measures were able to be carried out with might and main in 1989 in accordance with the guidance of the Heads of the State fostering our three main national causes which are non-disintegration of  the Union, non-disintegration of the national solidarity and perpetuation of the sovereignty of the State and focusing on peace and tranquility in the region, national solidarity and regional development.

Establishing of groups on Progress of Border Areas and National Races

Duties of the Central Committee

b.        Confirming , giving  guidance  and  causing  the  implementation  of  long-term  and  short-term master plans drawn up by the Ministry and submitted through the Work Committee ;

c.         Laying  down  development  works  which  should  be  carried  out  immediately at the border areas and  causing  implementation  thereof ;

e.         Laying down and carrying out  measures for maintaining security, prevalence of law and order and regional peace and tranquility in order to raise the perpetual momentum of the development works at the  border  areas;

f.          Giving decision to enable determination of  Development Areas  which should be expended.

Powers of  the Central  Committee

The  duties  and  powers  of  the  Work  Committee

a.         Scrutinizing  long-term  and  short-term master plans drawn up and submitted by the Ministry and submitting and obtaining confirmation of the Central Committee ;

b.         Giving guidance for the implementation of long-term and short-term master plans, which have been confirmed by the Central Committee and supervising and inspecting the works;

c.         Giving  guidance  for  the  implementation  of  development  works  which  have  been prescribed for immediate performance by the Central Committee and supervising and inspecting the works;

d.         Forming  Work  Sub-Committee at the Central level and determining the duties there of;

e.         Forming Regional Work Committees and determining the duties there of;

f.          Causing the drawing up and submission of work schemes sector wise by the Work Sub Committees and Regional Work Committees and Causing implementation there of;

g.         Co-ordinating the activities of the Ministry, Work Sub-Committees and Regional Work Committees;

i.     Making arrangement, as may be necessary for obtaining funds and allocation there of;

Management Structure for the implementation of Border Areas Development measures 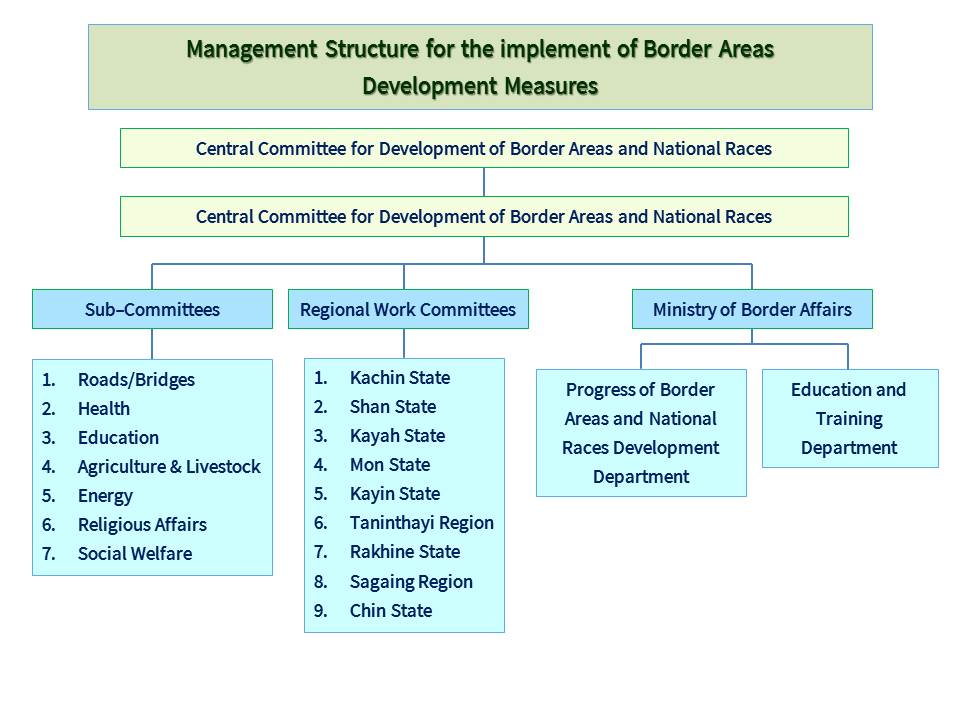 The Organization of the Ministry 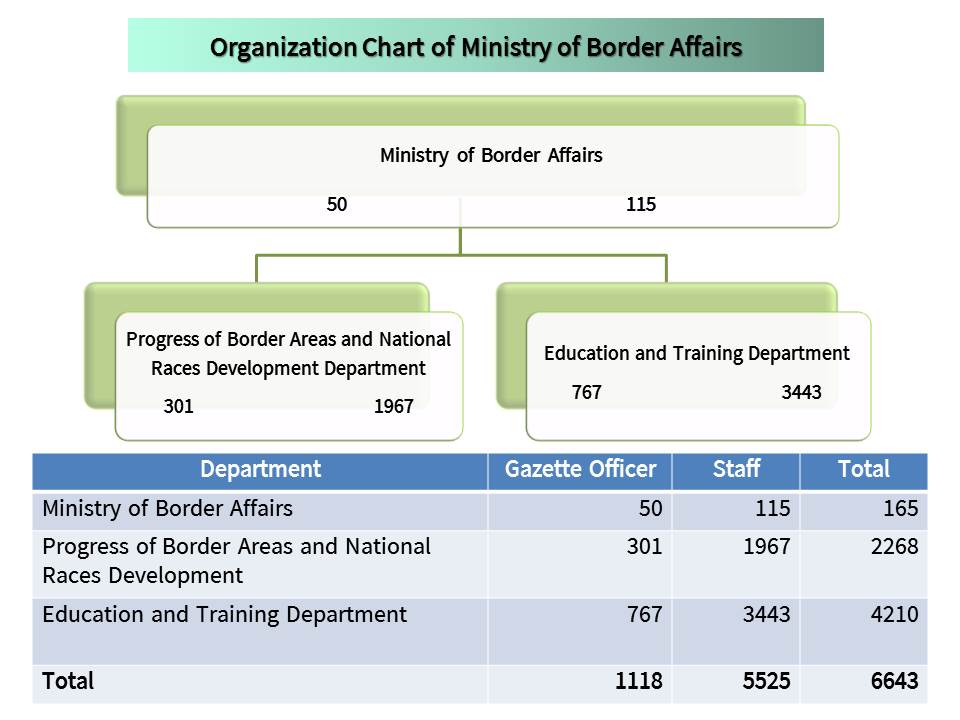 (a)    Stability and tranquility in the border areas.

(b)    Development of the border areas.

(c)    Development of socio-economic condition of the people in border areas.

(a)     To preserve and maintain the security, prevalence of law and order and regional peace and tranquility  of the border areas.

(b)     To strengthen the amity among national races.

(c)     To develop socio-economy of national races by establishing infrastructune  in border areas.

(d)     To preserve the culture, literature and good custom of the national races.

(e)     To propagate religious affairs in the border areas.

(f)      To pursue basic education, higher education and   professional education for the future of nationalities youth.

(g)     To serve the development of their respective  regions  by their willingness.

The Functions of the Ministry

(a)     To designate special development zones for the development of  border areas and national races.

(b)    To draw up the long-term and short-term plans for the development of national races residing in border areas.

(c)      To implement the long-term and short-term plans which are confirmed by the Central Committee for the Development of Border Areas and National Races.

(d)     To implement the development works which have been prescribed for immediate performance by the Central committee for the development of Border Areas and National Races.

(e)       To implement socio-economic infrastructure for the border areas with annual plans such as:

(f)        To give chances for Nationalities Youth living in different border areas to be able to attend schools from Basic Education Middle School to High School for free of charge.

(h)       To consolidate the Union Spirit and amity among the Nationalities Youth while studying together at the College and to understand and cherish the culture tradition, customs and practices of national races.

(j)        To assign duties to the nationalities youth at the respective Ministries after completing higher education subjects so that they can participate in their regional development work.

(k)       To teach young national races women in border areas the subjects for women vocational expertise and give them necessary aids until they can set up their own business with the vocational skills they possess.

(l)        To teach subjects for engineering to the Nationalities Youth in border areas with the aim of  becoming skillful workers and carrying out the development works for Micro-Manufacturing and Micro-Industrial business.

(m)      To set up the culture exchanging programs in order for all Nationalities Youth in Development areas to enrich a wider knowledge.

(n)       To carry out national affairs  as a priority in accordance with the desire  of  Nationalities Youth.

(o)       To make arrangements for the promotion and  propagation of religious affairs in the border areas.

(q)       To protect and preserve border boundary pillars and markers.

The Strategy of the Ministry

Strategy of Ministry of Border Affairs